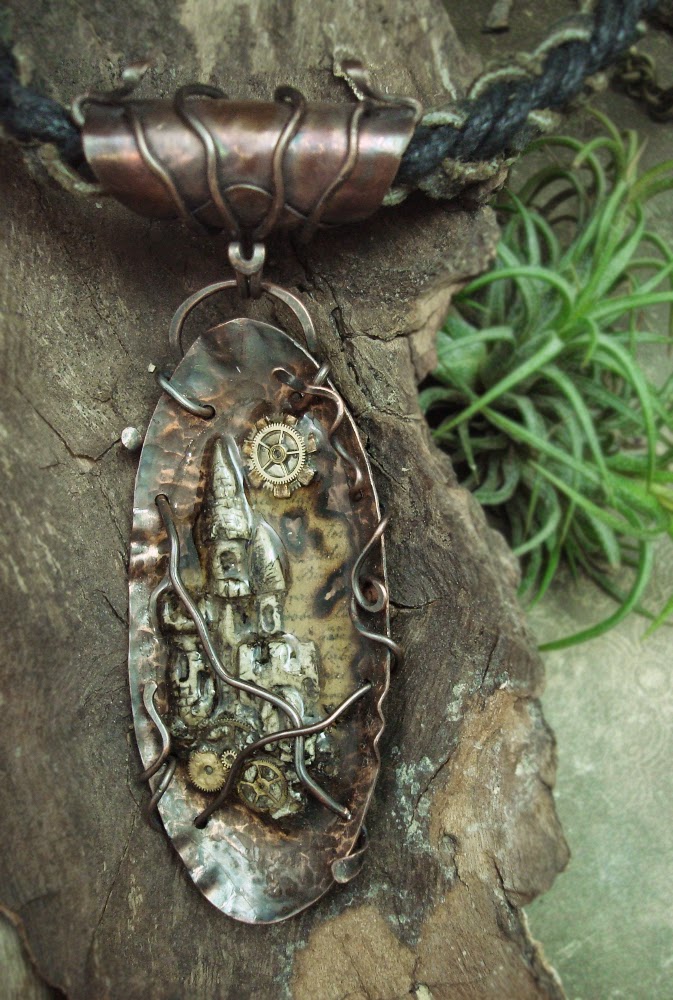 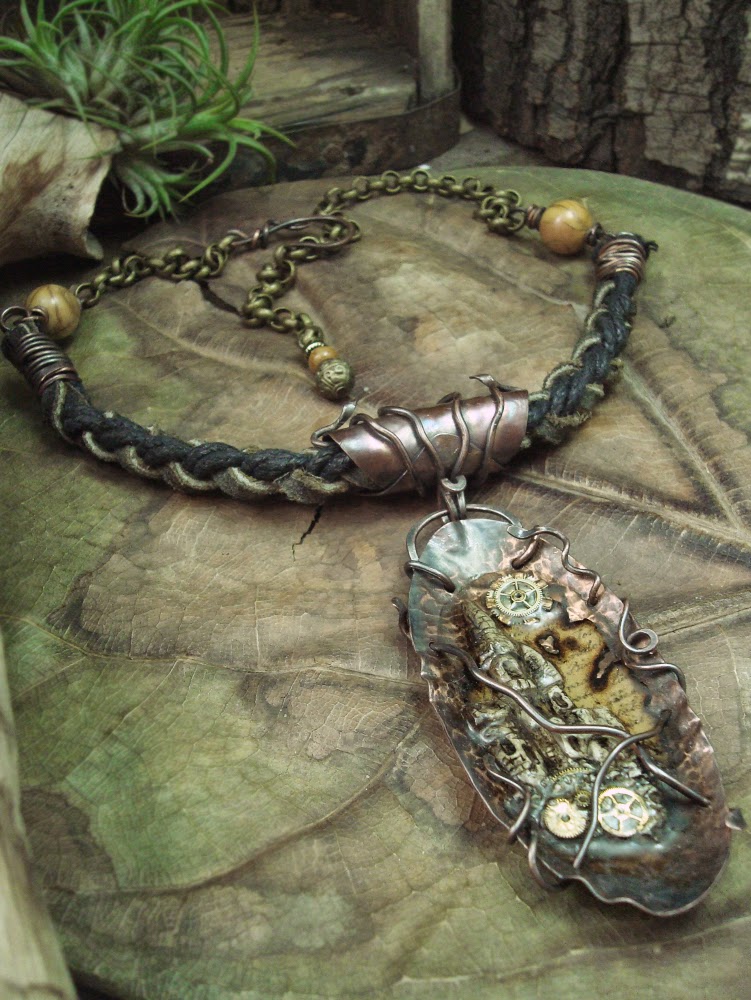 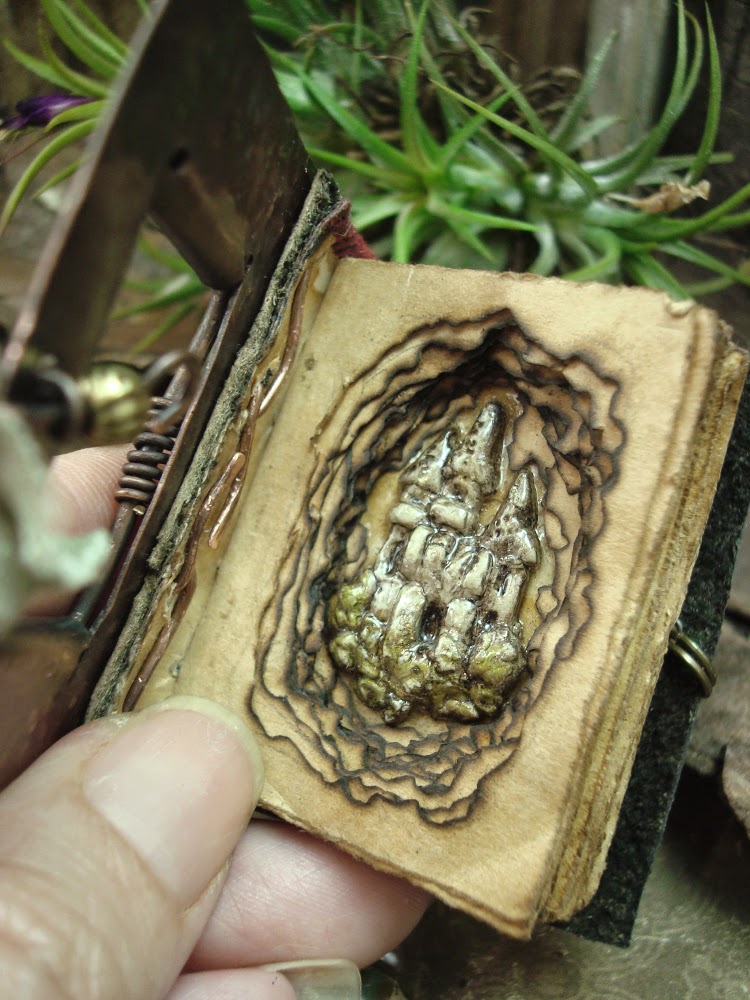 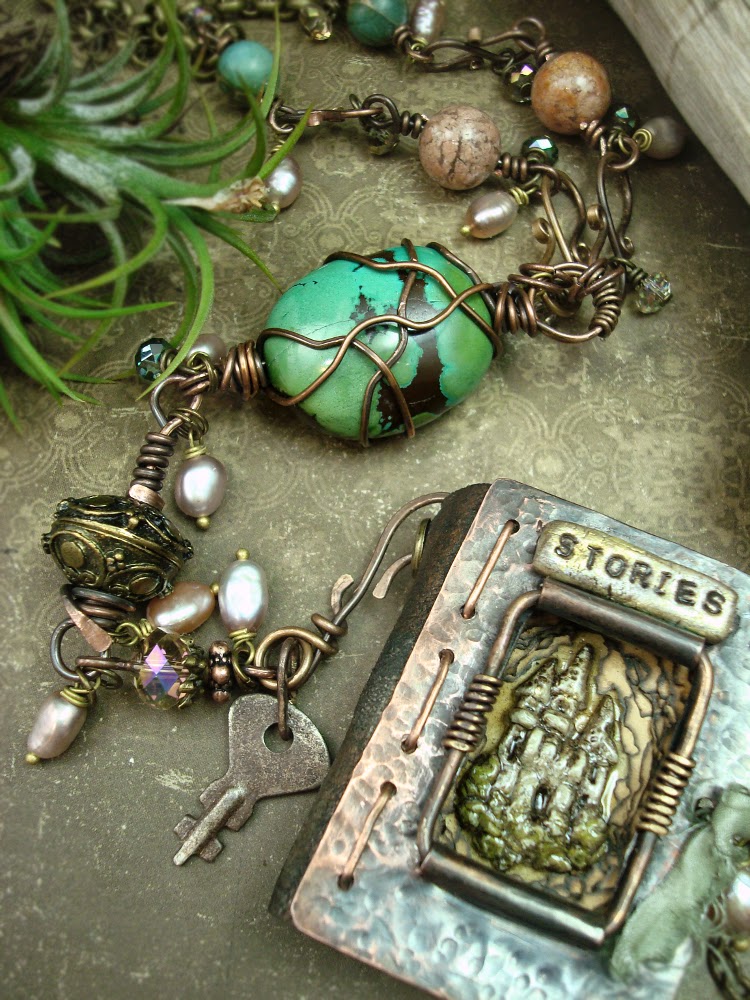 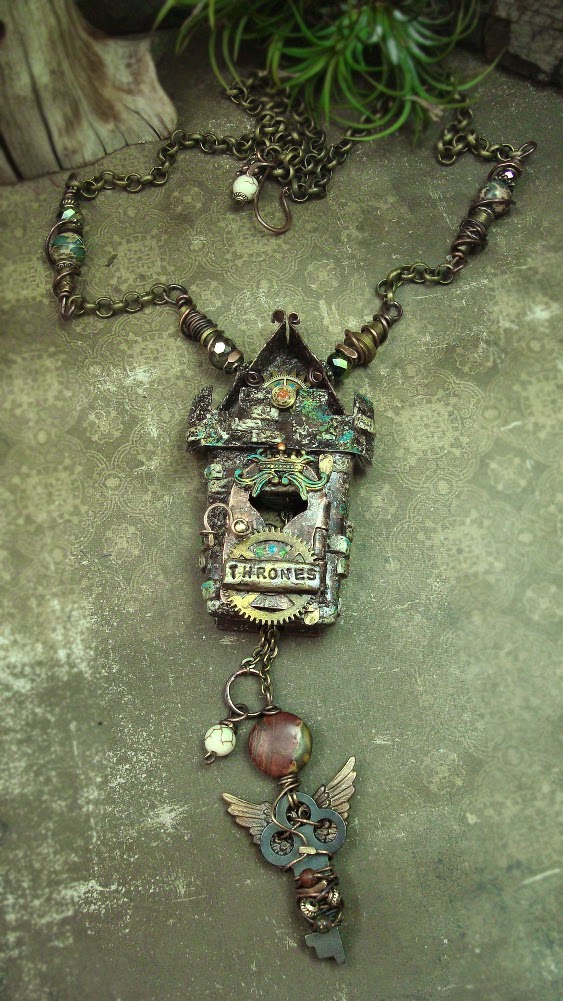 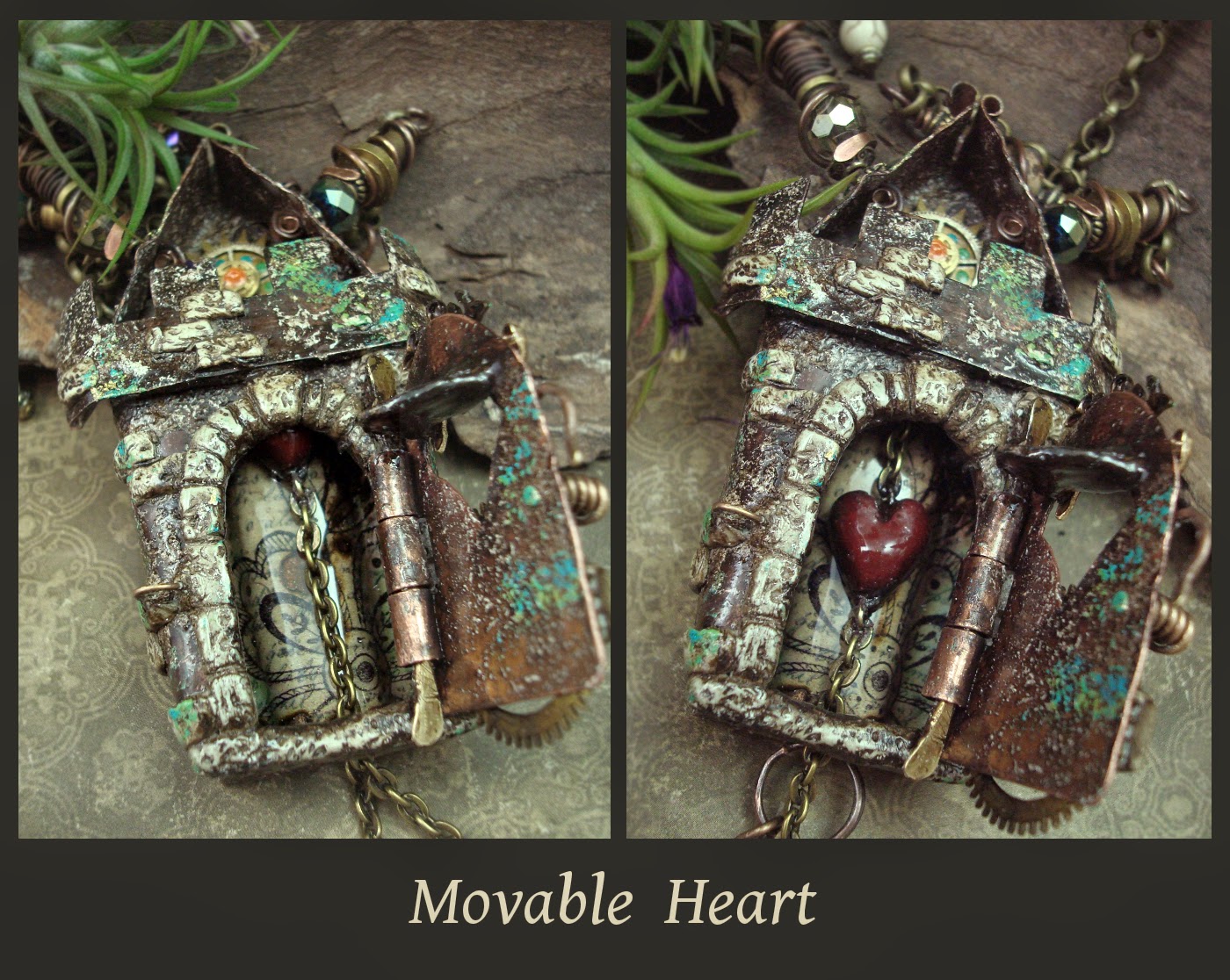 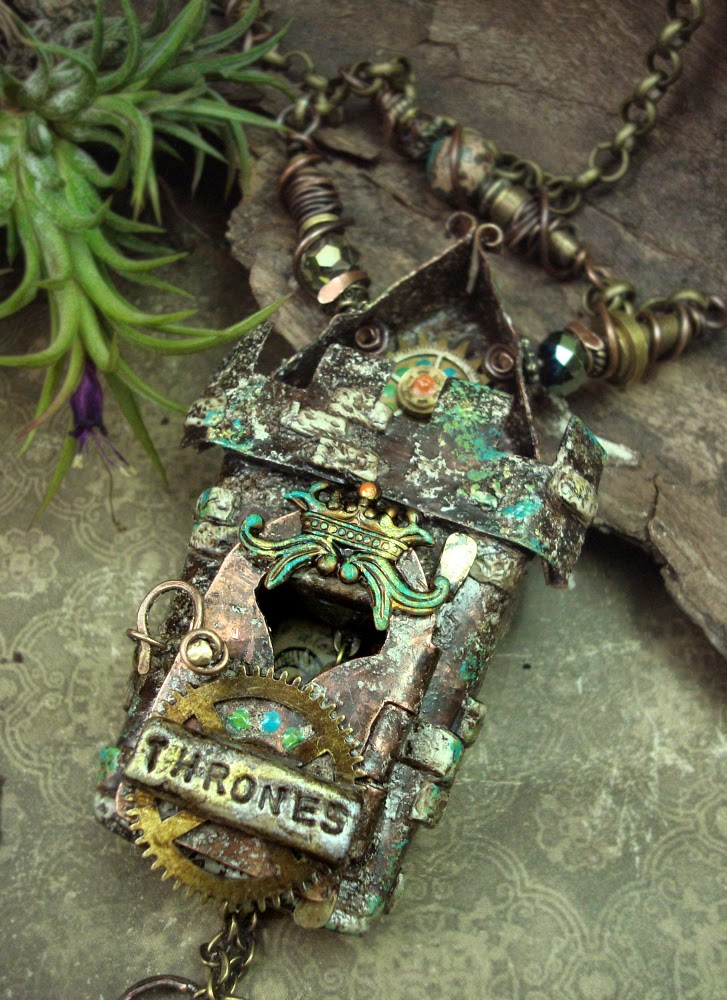 Posted by Luthien Thye 18 comments:
Email ThisBlogThis!Share to TwitterShare to FacebookShare to Pinterest

what if you were from an ancient bloodline of shadow hunters ...

The dreams came nearly every night now.
Ciaran knew exactly when it would begin. It always starts with an old heavy wooden door which he has to open. And then, a long dark tunnel which would finally end in an ancient tomb room. Carved on the stone tomb is a symbol. It is a symbol that looked somewhat like an old clock with a dagger for a pendulum(?). He didn't even know if it was a clock because it had no hands, only a curious looking device in place where the hands would have been. And each time, he was compelled to touch the symbol even though he knew exactly what would happen to him. 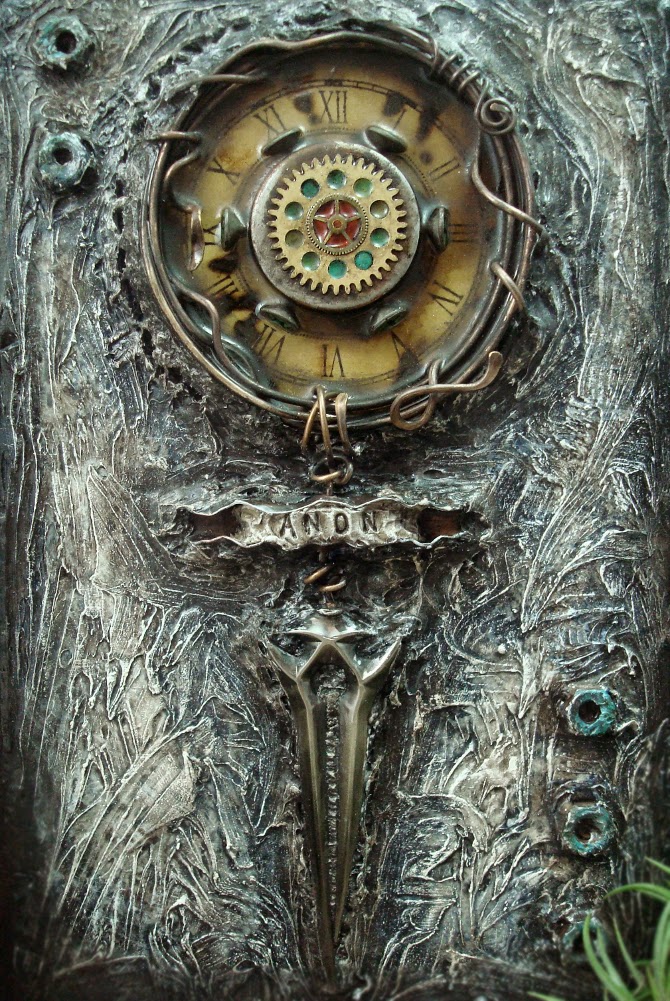 Ciaran jolted back into reality, and starring straight at him was the lawyer. “Y..yes … sorry … what was it?”

“The key, Mr McFarlane. In the will it is written that Ciaran McFarlane was to inherit the house. Here is the key and the address. I trust that everything is in order, sir?”

“Y...yes. I er … “, Ciaran let out a small laugh, still in disbelief as he accepts the letter and a key. What an old key, he thought, catching sight of the rusted artifact in his hand.


The highlands of Scotland was just like what they say, windy and wet … and old. Ciaran finally saw the house he inherited from his grandfather as he slowly eased his rented Audi into the driveway of the huge 50 acres estate, which was now his, as well.

“I had a grandfather?”, he thought to himself and laughed at the joke. He never knew his parents, let alone grandfather. For as long as he can remember, he is an orphan. An orphan who made good of himself in New York City. He is the youngest rising star of the advertising industry and was just going about his normal upper-class yuppie life, until the dreams came …

Without even realizing it, Ciaran was now standing right in front of the huge double door to the half dilapidated house. Trembling, he fitted the key into the lock and turned … click! Well, more like “CRACK!!” … and the huge doors flung open. Apprehensively, he took a step into the dark hall. Strokes of light were coming in from the windows above … he was glad it was high noon. At least there was some light! And then, out of the corner of his eye, Ciaran caught sight of a huge mural on the dusty floor beneath his feet. He couldn't believe his eyes at what he saw. On the dusty floor, was a mural of the symbol in his dreams. 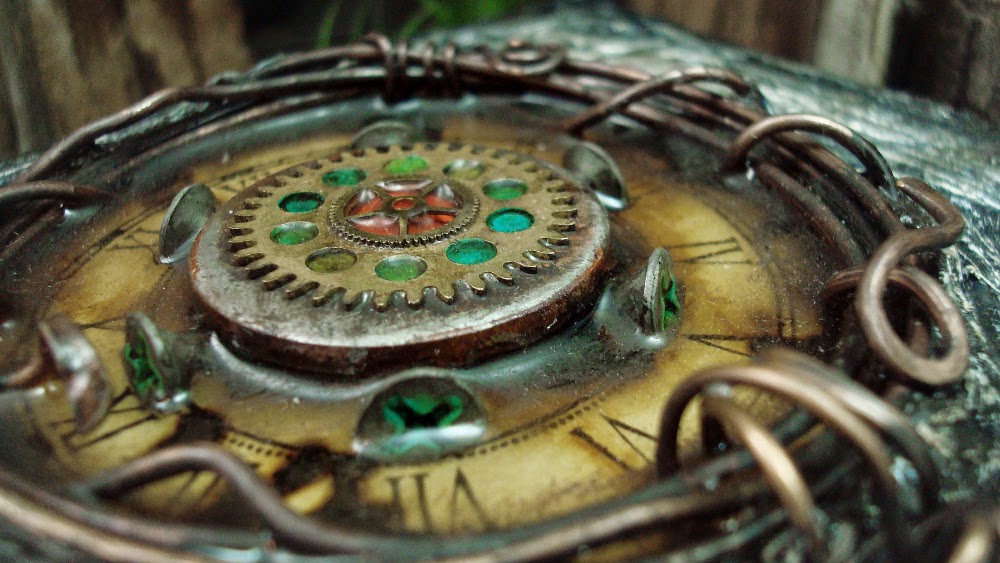 That night, Ciaran couldn't really sleep. So he decided to do some more research on the internet. He took out his smartphone and for the thousandth time, scrolled through the images that he took of the symbol on the floor. All of a sudden, he caught something that he hadn't noticed earlier. Expanding the photo on the screen, he was sure he saw some letters. He could barely make out an 'A', and 'N' and 'O', and then part of another letter … was it an 'I'? But that's all the grainy photo caught. A-N-O what?

Nothing out of the extraordinary turned up in the search until he typed, 'clock, dagger, ANON' and slammed on Enter.

Right at the bottom of the screen was an entry that read, “Arcane symbol and the resurfacing of an ancient bloodline”. Curious, Ciaran clicked on the link, and appearing instantly on the screen before him, was the symbol in his dreams. 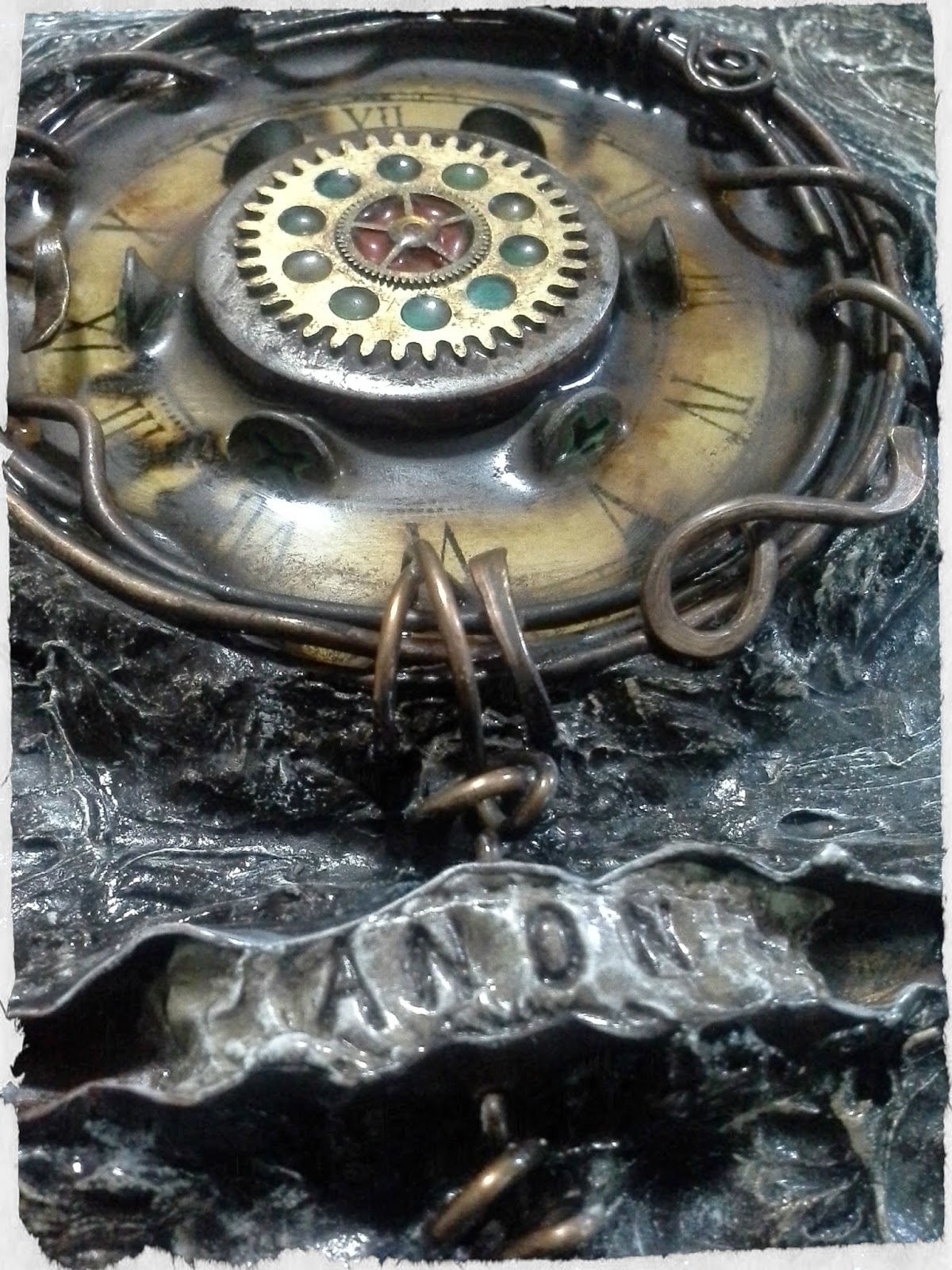 Ciaran was still propped up against the pillow, it was nearly dawn, but light didn't happen until 8am in November in Scotland. He still had a couple of hours to wait before he can pay another visit to the house … his house. He thought again of what he had read in that article on the internet. The symbol was apparently an arcane symbol of a very old bloodline dating from beyond the Medieval period. This bloodline kept themselves secret and apart from the main society because they were considered “devil's spawn”. You see, every male in this bloodline had the ability to travel back and forth between our world and the netherworld, or so the article says. During the periods of the witch-hunt between the 15th and 18th centuries, it was thought that this bloodline was all but exterminated. But there was speculation that they have resurfaced again during the mid 19th century, reinventing and reentering into the mainstream society as industrialists. They were known by few as 'the Anonymous', hence ANON was inscribed into their symbol as the mark of a new era for them. Whether or not they still had their “abilities”, or practiced them, no one knows. 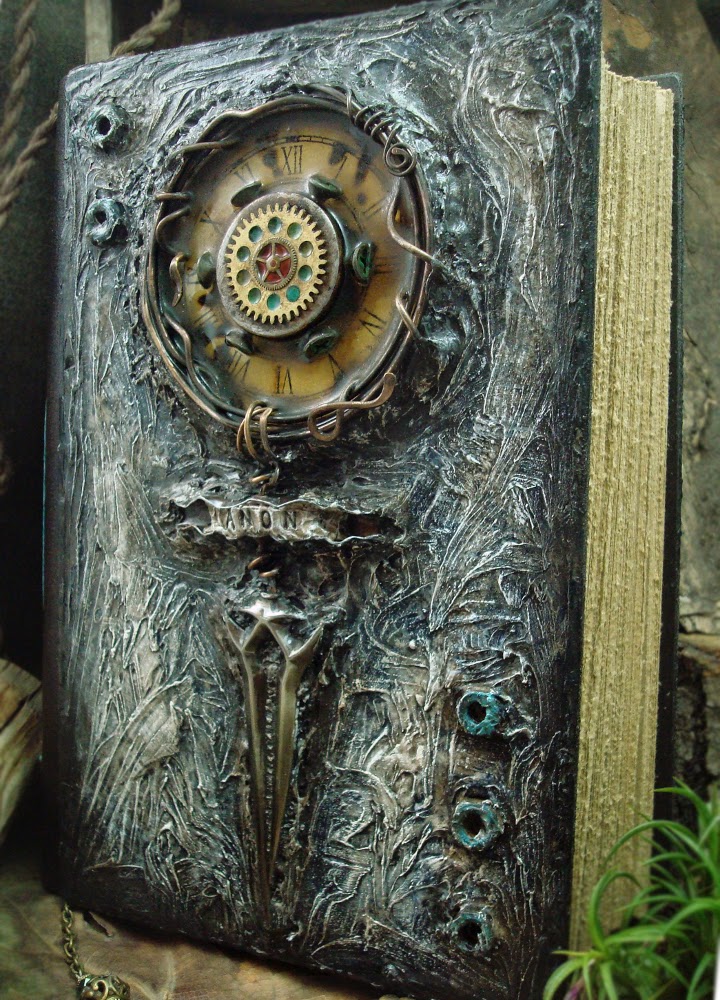 Ciaran let out a cynical laugh. “Perhaps it is just a bunch of romantic wannabes who wanted to feel that they are part of some superhuman clan … ”, he thought to himself. His logic tells him that this all BS … yet why is there a gnawing feeling deep within him.

Outside, the sun has finally come up …

HAH!! I hope you liked that little story there :) I am pretty pleased with how the texture and the new paint technique I was using on this journal came out. Looks almost menacing and very old. This journal is larger than what I normally would do ... it is a 6 x 9 inch book with a whooping 336 writable surfaces, and heavy!

Now, on to a totally different topic ... 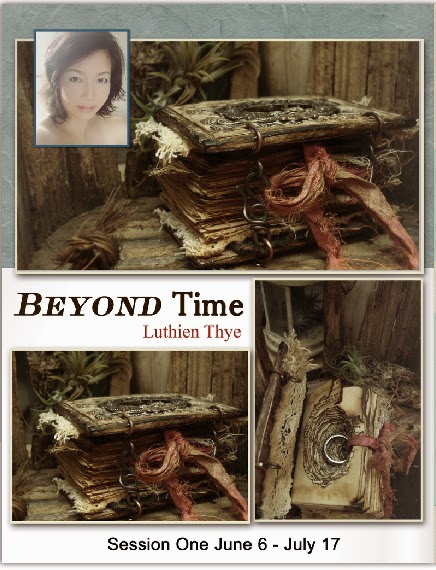 I am pretty psyched as my online class with Artful Gathering will officially begin tomorrow!! YAY!! To those of you who have signed up for my mixed media miniature book class, I cannot wait to meet all of you in class :) Registration is still open to all for another 3 weeks at Artful Gathering Online Art Retreat, so common and join me - no need to leave your home and peejays are most welcome ;) Let's make some art together!

Here are some photos the hubs took of me while I was working at my tiny little unruly space ... thru my reading glasses! 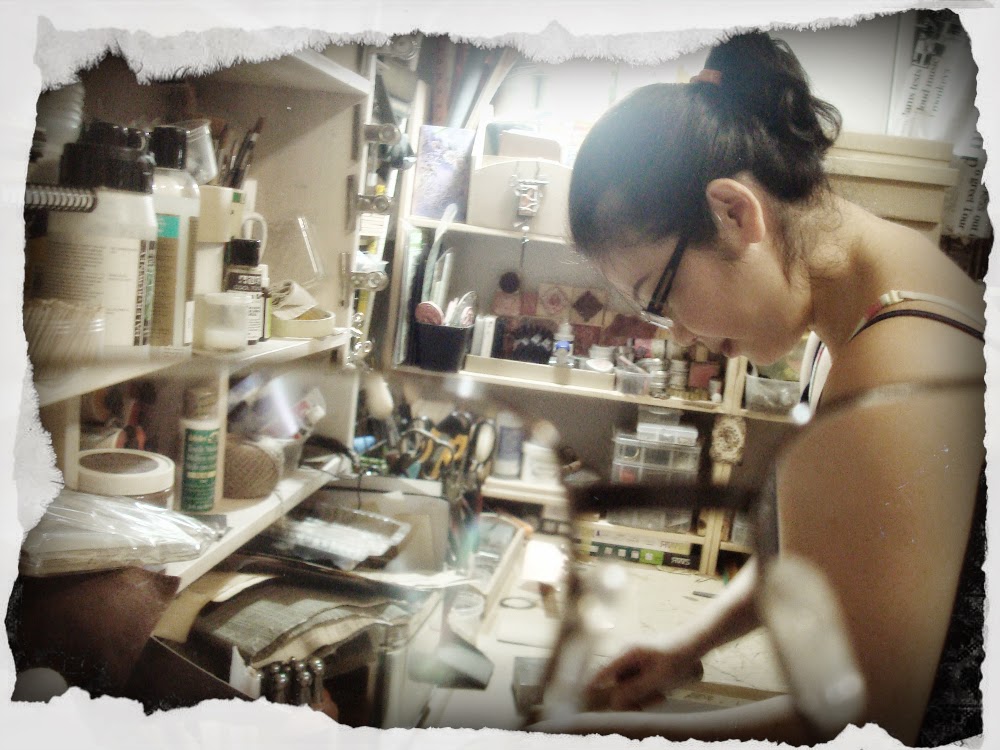 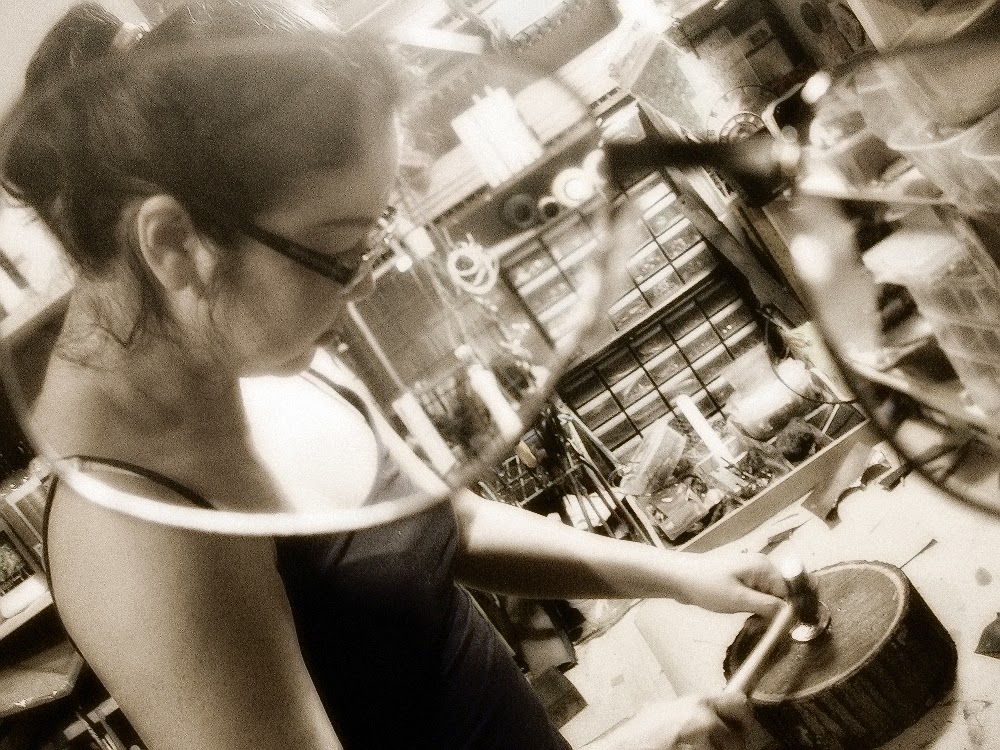 Posted by Luthien Thye 14 comments:
Email ThisBlogThis!Share to TwitterShare to FacebookShare to Pinterest