Ay ... over a month again I have not written on here. Blame it on the bad back, school holidays and Hari Raya celebration. But having said that, I have not been totally unproductive. Though I wish I was more prolific like some of my friends over at Pinterest ... Janet aka AnvilArtifacts and Marie aka SkyeJewels ... yea you super gals, I'm telling on you!! Gosh ... even the names of their shops sound super cool isn't it?!

Anyhow, here's my month's worth of stuff ...


and these 3 below ... which I must specially mention the artisan who made those beautiful huge rondelle ceramic beads for me. Ingrid aka PotteryGirl


Might I also add that the last pair of earrings, Painted Petals was the result of my mad idea of combining some one-stroke painting into my jewelry. Once upon a while ago ... I was quite addicted to folk art. Tell you a secret ... I haven't been a jewelry artist for a long time you know. I began this blog as dabbler in folk art. Nothing spectacular, but you can see some of my folk art here and here ... and here is a tutorial on how to paint a sunflower using the one-stroke technique, if anyone's interested ;)

Besides earrings, I made 2 more book necklaces. This one was a continuity from my Women who Made a Difference collection from last post. I just HAD to add Frida, the Artist in!

And then there's this impromptu wearable book called I Chose Love ... inspired by a quote I chanced upon over the internet. And then there's this.  A Tree of Life nestled within a house.
“Where we love is home - home that our feet may leave, but not our hearts.” ~ Oliver Wendell Holmes ~

I came across this quote by accident as well, and it affected me in so many different ways. My first thought went to my girls. Inevitably one day, they would leave home to seek their own fortunes. And though it would be so, would it be as the words suggest, their hearts would always return home? Perhaps. Or at least until they build their own homes whence their hearts would follow. Yet part of their hearts would always have a safe place with me and their father. As mine have with my parents. And so the cycle of love is never-ending ... 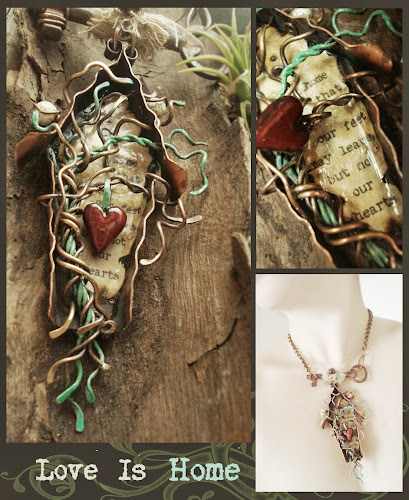 Finally, the final piece of the month ... 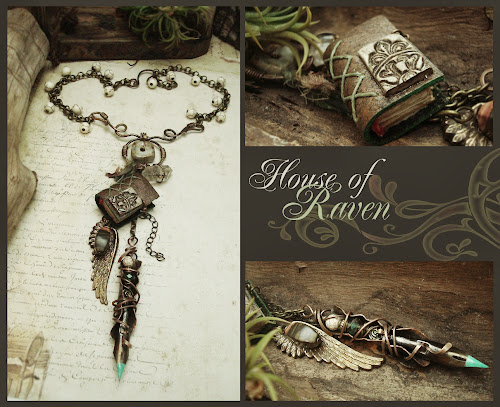 When the House of Raven was all but annihilated by the Darklord, the only surviving heir was a little Princess, not more than a few days old. She was ferried away into the dark woods beyond the kingdom by the Bowman, one of the Guardians of the woods. As Raven was growing up, she knows nothing of her history except that she must at all times stay within the shadows of the woods, and wear an amulet so queer, that she often wondered what it was. She lived a happy, carefree life … until the day when she turned 16. On that day, Raven was told who she really was and what the amulet really meant.

When the King of the House of Raven knew what was to be the fate of his House, he had summoned the Elder Druids to counsel. They are to cast a spell on the magical book of the House of Raven, so that no one would find it except its rightful owner. The Elder Druids then thought of the most brilliant plan. They turned the book so small, that is would be unrecognizable even in plain sight! Satisfied by the plan, the King did the unthinkable. He cut off one of his arms, and asked the Elder Druids to turned it into a tiny wing so that a part of him may travel with his beloved daughter through her difficult journey ahead. Together, the book and the wing would accompany and protect Raven through her childhood years, and when she comes of age, they will help her return to power and claim her rightful place as heir to the Kingdom.

Raven must now embark on a quest with the Bowman to find the blind Seeress … who is the only one that could unmake the spell and turn the book back to its original form.

* Cross Stitching inspired by the lovely work of Bibliographica
Posted by Luthien Thye
Email ThisBlogThis!Share to TwitterShare to FacebookShare to Pinterest