A Great Many Happenings

Woah!! It has been over a month hasn't it? I wonder why time is always on turbo gear ... what's the rush anyway? No matter how many times I try to knock some sense into his head, he never slows down. Never! Not even age can make him slow down. In fact, the older he gets, the faster he moves ... crap. I guess I just have to make the most out of him ...

3 weeks of my life passed in May with a gnawing backache and stomach discomfort. Of course, all those crappy thoughts came to play in my head ... heart attack, gall stones, kidney stones, panic attack etc etc etc. And I learned a new word from my friend ... he calls me a "Hypochondriac". Heh!! I sure hope I am ... that's better than heart attack, gall stones, kidney stones right? Anyhow, the pains seem to have gone, except for the back pain, which comes back when I'm sitting too long facebooking. Oh .. by the way ... for those of you who knew about my cholesterol scare last year, I finally went back for a blood test and the cholesterol is down to 4.8 ... which is now within the normal level. What a relief! A year of healthy eating -  lots of oats, salads, Virgin coconut oil AND EXERCISE really did do their job. Brought my cholesterol number down from 7 to 4.8 ... no medication needed :)

After the back pain episode, I managed to get myself to make some stuff. Earrings! I'm on an earring fetish phase ...


Yes ... and a lot of resin and paper :)
OH! Did I mention I also bought myself (finally) a dapping set?


Crazy amount of earrings I made! But I also managed to sneak a book necklace in. Fragments of Time is a simple collection of little objects that remind me of times passed, and how much I yearn sometimes, to live a simpler and uncomplicated life ... 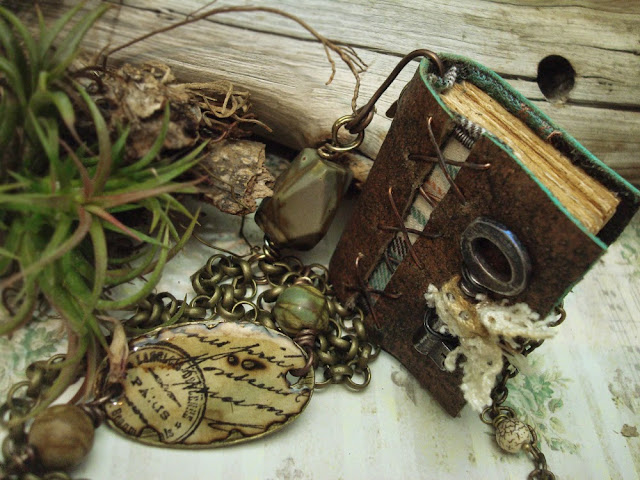 My final show and tell piece for today, as you will see below, has a dapped disc too. But this wasn't created with the metal dapping set I bought, because it was too small for this larger disc I wanted to make. So I made this disc in the primitive way ... a hammer and a tree log which I had lugged back from the side of the road where some men were trimming the trees. 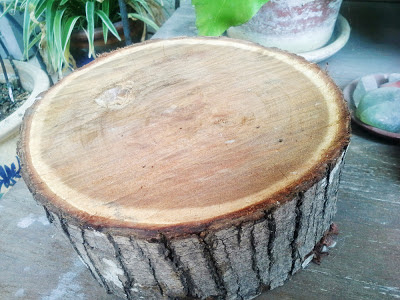 I dun think you can see the hammer marks on it since this is the first time I'm using this log as a dapping base. But one day perhaps, you might even see a concave area on the log ... which means this log has earned its medal as a dapping base, or rather, I have earned my medal as a true metalsmith ;)

From the log it came ... this piece I'm seriously stoked with. Forging Poetry. 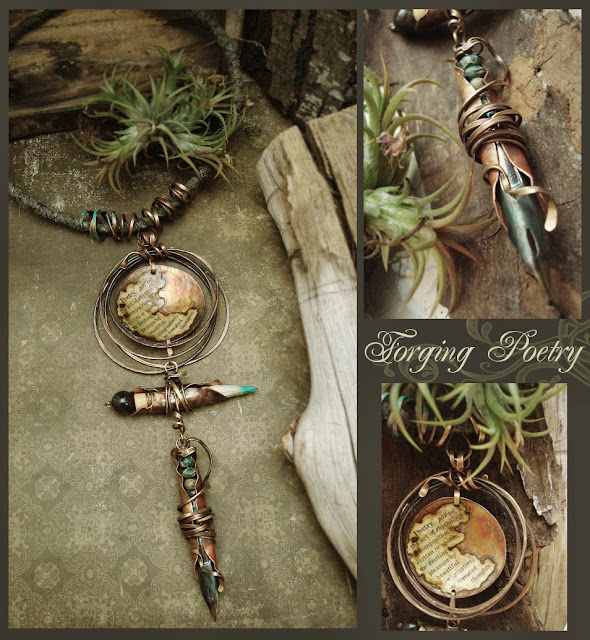 From the beginning of time, the pen and the brush were used as avenues for creative expressions. The brush, a universal symbol for Art, the Artist and their creative expressions. For me personally, writings, books, stories, have always inspired my imagination. The pen therefore, represents something scared in my dreams.

At the last phase of this piece, I wanted to choose a word to express it. There was no doubt in my mind that the word would be 'Poetry'. I had written Poetry today. But not in ink, I had written poetry in metal.