As soon as he opened his eyes, he knew exactly where he was. With a dejected sigh, he released the hatch and climbed out of the capsule. He glanced to his right, the mainframe flashed

It did not surprise him. Still clutching onto his amulet, his eyes squinted at the amulet’s compass. Somewhere in Denmark ... Darn! So near, but not enough. Unsuccessful yet again. 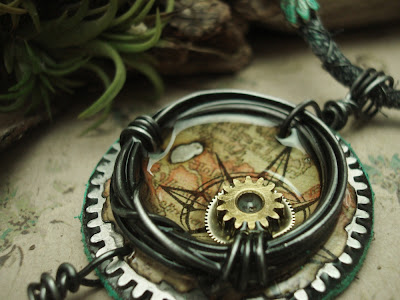 He ran his fingers across the etched stone-like fragment on the amulet.
“Paris”, he whispered softly to himself … 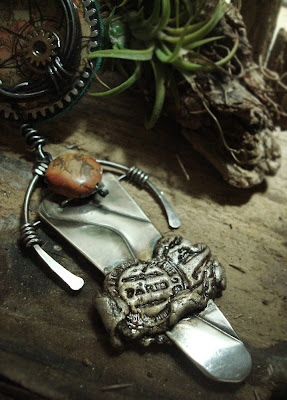 ‘Damn Lamarque for dying! Damn those crazy people! How can 100,000 of them appear in one day?! We don’t even have 100,000 people here in the Republic!. Those were the curses going on in his head as he walked towards the mainframe. He needed to get back to that point in time where they were supposed to meet and run away together. And then suddenly, the streets were filled with throngs and throngs of angry bodies, all wanting blood. He waited at the window of his quaint apartment anxiously. Where is she? And then it happened. ‘No … no NO! Not now!’. As if they could hear him! He could feel his molecules collapsing. In dismay, the only thing he managed to grab was a letter she had written to him after their first meeting. He needed something to remind him of this place, and of her. He was coming back for her … no matter what it took.

‘Curse them for warping me back to the Time Ship!. That was 15 years ago. Still caressing the stone-like fragment, he remembered tearing out a little piece of the letter where the Paris stamp was and attaching it to the Time Amulet that he had constructed, so that he will never forget his destination. Through time, even though the piece of letter had petrified and turned to stone, his heart never stopped loving Satin. With that, he resets the coordinates on the mainframe and walks back to the time capsule. 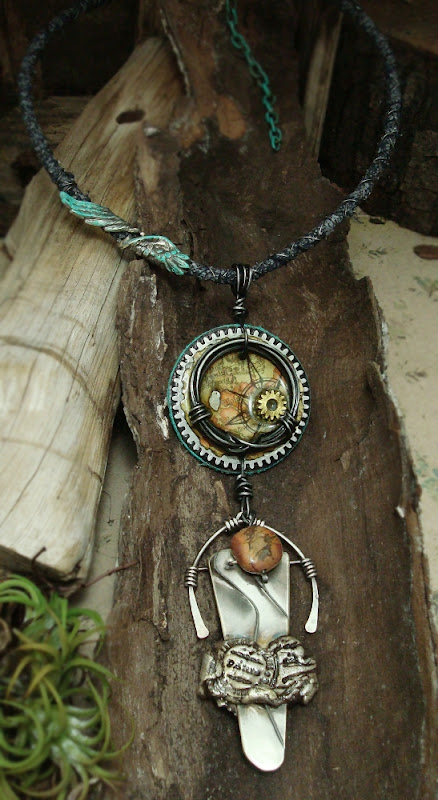 I hope you liked the story ;) Hot from the over, this piece called the Time Traveler was completed just last night.

Before this I was playing with 2 pairs of earrings. Both rather huge ... for my normal earring standards. But what can I say, they were both inspired by women of strength.

This one I gave an Elven name, Maethor-Aranel which translates to Warrior-Princess 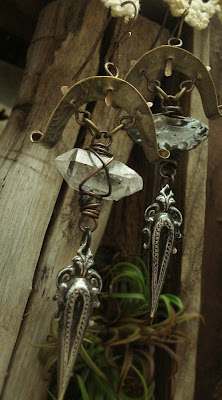 And this, is Helen of Troy. 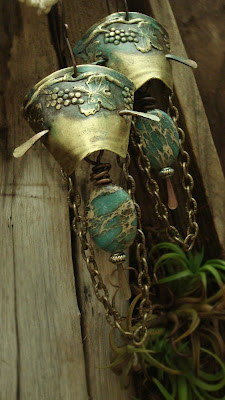 In fact, these 3 pieces, the necklace and the earrings, all have one thing in common. They all began their existence with pieces of repurpose metal given to me by a good friend and wonderful artist, Barry of Rustnstuff. Barry works with metal and all of his art began their lives as something else, everyday items like serving trays, old pots, metal trash that people discard. And in Barry's hands, these items are cut up, torched, hammered, formed and worked into beautiful sculptural pieces. I was lucky enough to be sent quite a heap of metal pieces, some already worked by him into components, some still in their cut up unworked state. And this week I've been inspired to work on his gifts. I do hope he likes what he sees :) If you haven't yet met Barry, you should pop over to his place and marvel at his wonderful work! Simple click any "Barry"s and it will take you there :)
Posted by Luthien Thye
Email ThisBlogThis!Share to TwitterShare to FacebookShare to Pinterest