A Love Beyond Time

The Time Traveler jolted up and came face to face with a shabbily clothed young man. He took a glance around trying to make out his new surroundings as quickly as he can so that he could plan for his next course of action. Most of the time he would wake up disappointed, but this time there was something different. The air smelt familiar. As his eyes finally focused on some of the things around him, his heart skipped a beat. He jumped straight up from the weathered worn wooden bench that he was lying on and grabbed the scruffy stranger by the collar, or what’s left of a collar. The Time Traveler uttered the first word that came to his mind.

The stranger looked at him curiously and answered, “Lamarque’s dead! Died a long time ago … you dunno?”

“Hey mister, get your hands off me! It’s 1857 for Christ’s sake!”
The stranger limped away quickly.

As the Time Traveler contemplated the date, his hand clutched harder onto his Time Amulet.

And then he caught sight of a building across the city square that made his heart beat wildly. Immediately, he ran towards the building, passing a huge sign on the way that read ‘PARIS’

He was looking up at the ornate old building once again. Even now in its half decrepit state; it brought back memories of the time he spent here with the girl he loved with all his heart … one whom he has been searching for the last 15 years. Slowly, he climbed the creaking stairway, not knowing what to expect. Very soon, he was facing the wooden door he was so familiar with. The door was slightly ajar, so he carefully pushed it open and peeked inside.

The little apartment that he used to live in, now looked very different. For one, it was mostly in pink. He took a step in and the floor creaked beneath him.

“Mother? Is that you? Did you leave something?”, came a female voice from what he use to remember as the kitchen.

Before he could turn to leave, a young lady, not more than 25, dressed in a simple frock came out. On her neck was a pendant not unlike the one he was clutching in his hand. They had the same compass, only the one she was wearing had a heart in it. It had writings on it that resembled his. And a key hung beneath the pendant, a key that was once his …

Every emotion he possessed, he felt it at that very moment. This was the face that he was searching the universe for the last 15 years, and now she is standing not more than 5 feet away from him. But yet, there was something very wrong. The time was wrong. According to the stranger he met outside, this face should be 25 years older. Finally, seemingly confused, the time traveler whispered,

A look of realization suddenly dawned upon the young lady’s face. 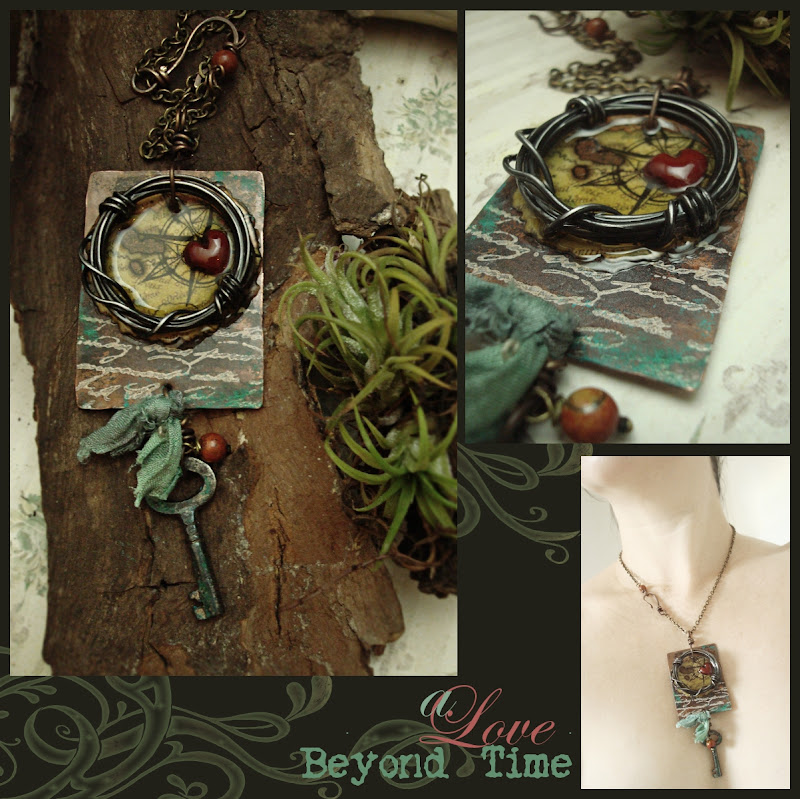 Those of you who have read my last post would remember why the Time Traveler had to return to Paris. Well, he finally did, only to find out that he had 2 gals waiting for him instead of just one. I wonder how he'll handle that!

Anyhow, this piece is now on my etsy ... not the physical piece, but the PDF Tutorial on how to construct this piece :) It's a 54 page tutorial with over 90 photos. Even more extensive than my last tutorial! Because this one had so many different elements to write on, for instance - simple metal working, how to work with epoxy clay, alternative uses of acrylic paint etc. But the most interesting part of this piece is how to make a bezel without fire or solder. I have always wanted to make a piece with a bezel that can hold little fragments of timeless objects and then freeze them in time with ICE Resin. But I could never make one cos I don't solder or own a torch. But in this piece, I've come up with a way to construct a no-solder bezel :) And not only that, it's a bezel made with wires ... yet, it holds ICE Resin with no problems of leakage or spillage :) 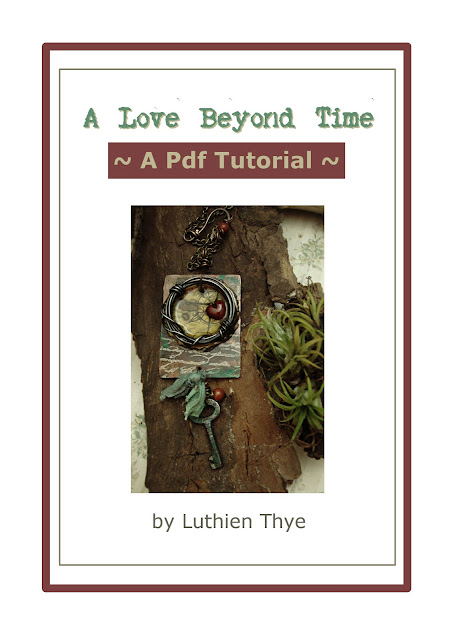 If you have some time, do pop over to my Etsy and have a look :)

Thank you all for your comments in the last 2 posts ... I am always really happy and excited to read what you guys have to say :)