goodness knows why, i suddenly have this obsession for rusty stuff! i've been nosing around etsy and ebay looking for rusted items, and i've even been picking up rusty nails on the streets! last friday i went to my local hardware store asking the guy for rusty washers. he kindly told me that they dun really have those cos no one would want to buy rusty washers. however he did search in his box full of washers, for ones that have rusted up a little :) good man!
since i can't find them rusty washers, i decided to make some. the guy at the hardware store tells me that acid would make the iron rust immediately and even offered to give me some. but with a little 5 year old octopus in the house ... bad idea. so NO acid.

however i do know that vinegar is acidic :) and i happen to have a bottle of white vinegar stashed away in the kitchen cupboard. so ... my experiment began in earnest! 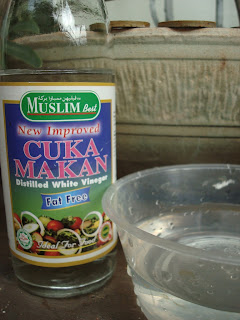 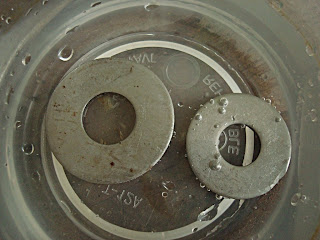 leave them for a few hours or over night if you have the patience.

and this is what happens when you take them out to dry :
this washer took about 7 minutes to rust. i've however sped the video up (to 26 seconds) cos no one in the right frame of mind would wanna stare at a rusting washer for 7 minutes!
i am actually pretty excited about this! now i can make my own rusted items using cooking vinegar and air :)

just look at some of the beauties i made!
these have been in the vinegar solution several times over the weekend, so they have more depth in color. the different layers of rust stain also create unique patterns on each of the washers. 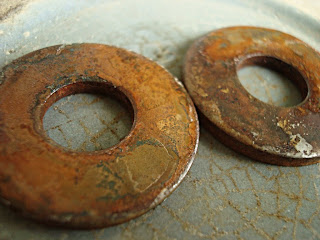 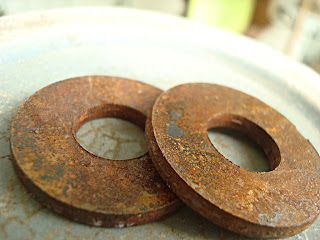 front side (left image) and back side (right image) ... the back side of the washers are not as smooth, so the rust looks "grainier".

so i did another experiment using salt water solution.
3/4 cups of water to one tablespoon of table salt. i soaked a couple of ALREADY RUSTED washers into the solution. and this is the result. 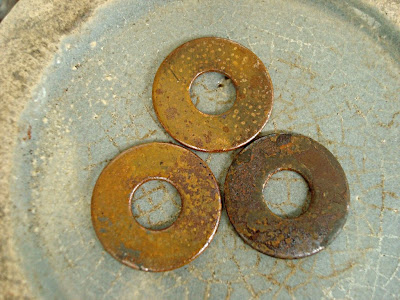 see the darker one? that's gone into salt water. salt seems to have a reaction on the yellow rust and turns it black. too long in the salt water solution and all your yellow rust will fall off, leaving only black stains. not nice ... trust me :(
just look at these 3!! cool aren't they? 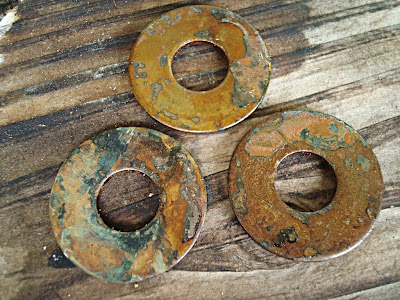 these have been in vinegar several times, dried, left to rust and then dipped in salt water, dried, then left to rust again ... this process has been repeated over several days and these are the sort of layering and coloring you would get. 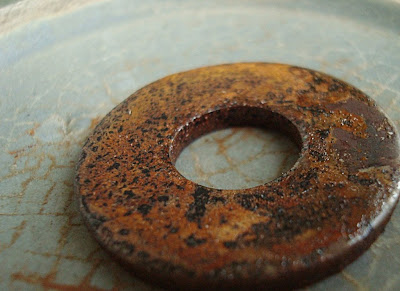 simply GORGEOUS !!
this is so fun! and wouldn't they look good on my mixed media journal covers? ;)

just a word of cautionary if you wanna try this. the rust made this way ... they are non too permanent, and will fade if you rub hard enough. they are similar to water stains. afterall, they are made only in the few days:) so ... if you like the rust you see on your iron, fix it with a fixative so you won't accidentally rub it away. otherwise, continue to let the iron rust naturally until you are satisfied then fix it. i use krylon's "workable fixative" on mine. and it works just fine :)
happy rusting! and
happy pimping! :)