i've been meddling with my photo editing software and pushing the limits a little ... well, i think "pushing the limits" is an overstatement, cos i actually just discovered you can do things like that *v_v embarassed* ...

i used to just use irfanview to tweek my images, but today i decided to try the GIMP2.6 software (you can download free from the net) people tell me that it's a real basic software, but since i haven't gone and learn the illustrator or photoshop yet (and also i have no money to buy them... yet) i'll just stick to basic and free for now... :) initially i only used the GIMP2.6 for all the effects and the photo collage i make for my items, but never the photo editing part.

it all started when i saw my fren mindy's photos on her accesories collection in her facebook page (click on the link and you'll see what i mean) and she says she uses natural sunlight, a white dining table and a bit of editing!! crap! so why dun my images look anything like that? (ok... i dun use natural sunlight much for reasons that i won't go into and i only use a mini auto sony cybershot *sigh*)
mine would look something like this ... 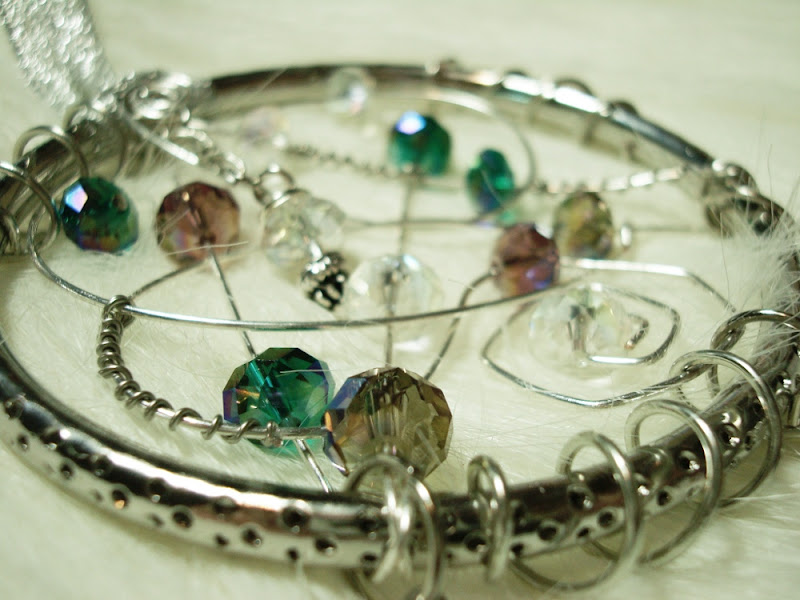 and that's after the tweek on the software...
by the way ... that's my new dreamcatcher or rather, i think it's more of a suncatcher cos it does look lovely by the window when the faceted beads are a-glittering in the sun.
well ... dissatisfied i was, i decided to tried the GIMP2.6 photo editing functions ... and here are some results. the left image is the original straight-from-camera, the right image has been "photoshopped" by the GIMP2.6 ("photoshopped by the GIMP2.6", ironical isn't it? see what branding can do to consumers?)
images 1a & 1b 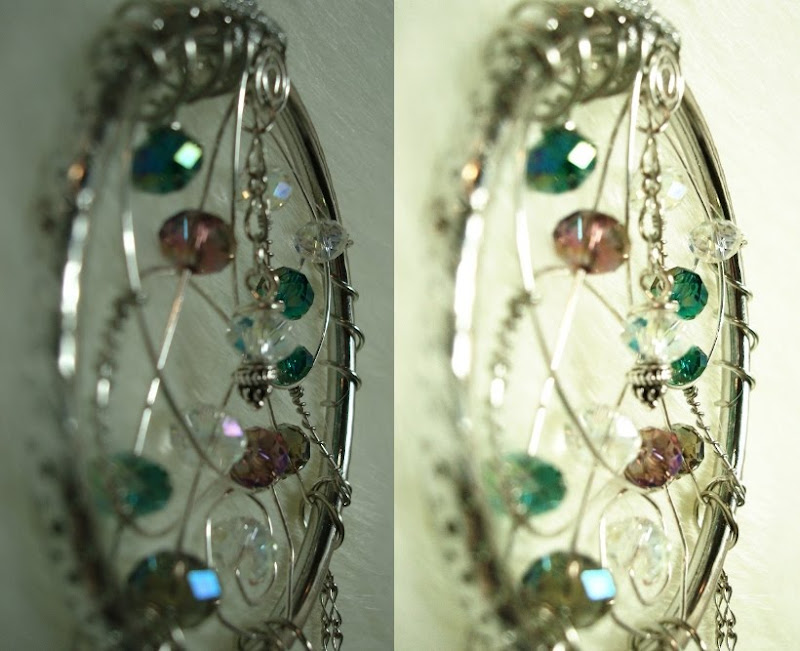 i pushed the exposure (?) or is it gamma (?) higher than i normally would go and i got closer to mindy's photos feel. now if you compare image 2b (right side) with the very first image, it looks much whiter. i also pushed the contrast up to bring back the dark details. 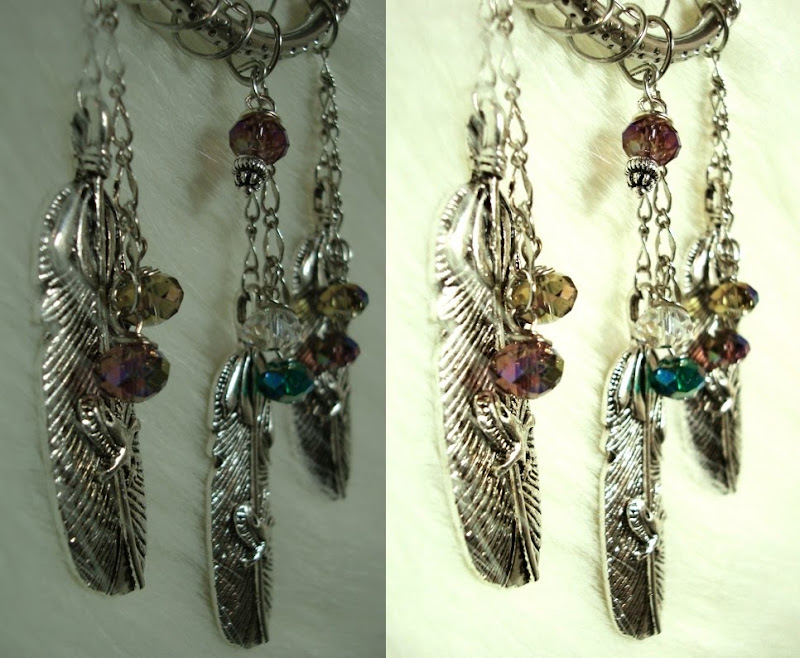 i "burn" images 3b and 4b even more ... and they're starting to look like some ancient elven relics glowing with magic! 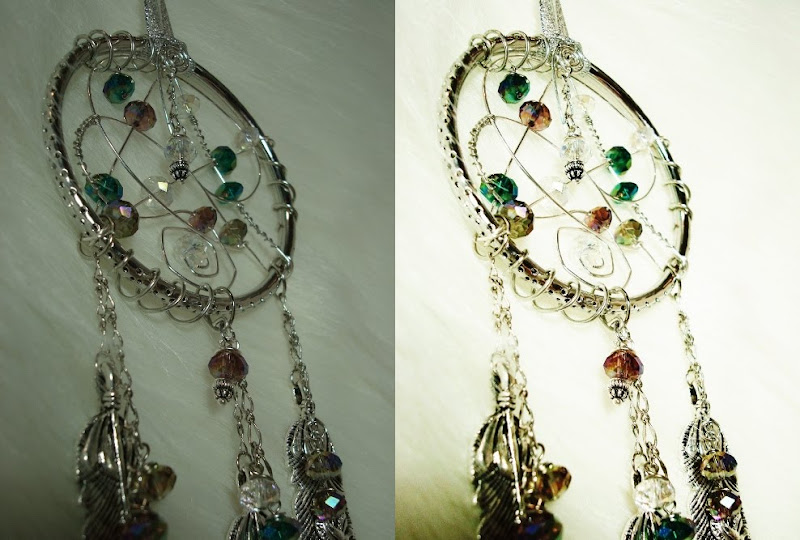 and this final one 5b is waaaay burn i think!

i think i got quite close to mindy's pictures effect ... and now the question is ...
can i actually put a product shot such as this one in etsy? would it be totally misleading? i personally think 1b and 2b are still alright but 5b is pretty unrealistic.

since i'm pretty new to photography i would love to know what do you think? ... especially etsy users and my photographer frens :) tell me your thoughts ok ... and tips ;)

and on a different note :) see the bangles? familiar? 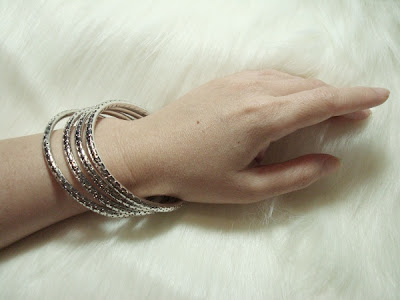 that's what i used for the dreamcatcher hoop :))
oh yeaaaa ... i also took this picture of my "photo studio set up" ... hehehe, just for you! 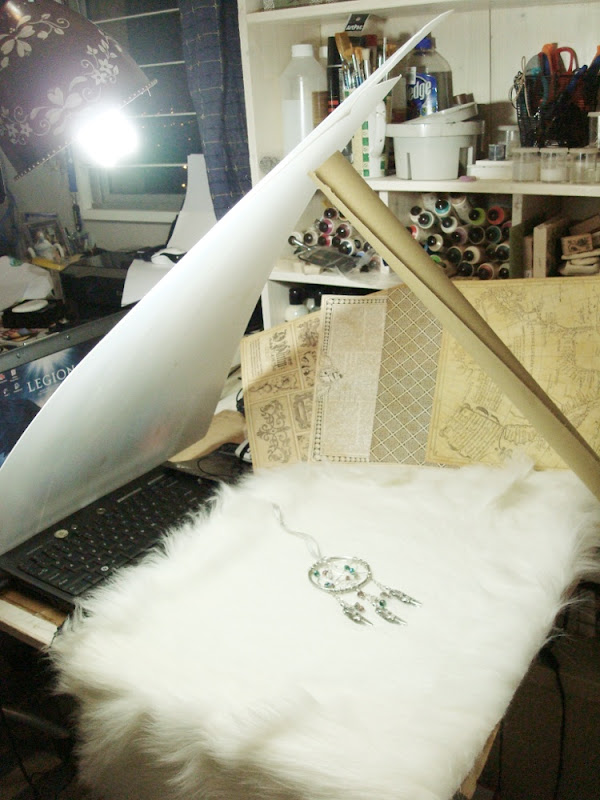 yes ... this is where i do my crafts, surf the net and where i take my product pictures!!

the "studio set up" is fully DIY and can be installed and pulled down in seconds ... and yes ... i usually do everything between 11pm - 5am :) i seriously think i'm some sort of vampire hybrid! see? that's why "no natural sunlight" :)