the premio meme award and pardon the mutterings 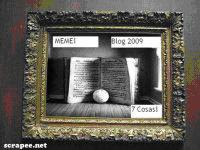 ahhh... i remember the first time when i got tagged, i was wondering what in the world it meant! i couldn't understand the concept of being tagged or having to tag someone. felt like an idiot when i had to ask sf of reduce footprints(who was the very first person to tag me) to explain it to me :) well... after some education and some time going round in blogworld , i now know a tag or an award is in essence, an honor :) and i am most honored to have been given the meme award by two lovely ladies whom i've come to know and admire in more ways than one. 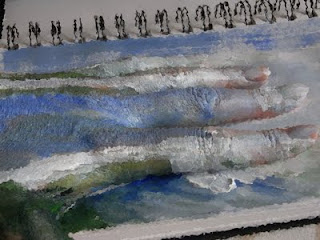 the first comes from the wright stuff, a writer and artist, who weaves the most superb tales with her virtual quill and conjures utterly unique art with her imagination. whether it is a tale of castles, or knights caught in a duel with well ... the rain :p or this incredibly creative painting on her hand ... yes... you heard right , a seascape ON her hand ... this artist-writer would always surprise me in more than one way whenever i visit her at her blog :) 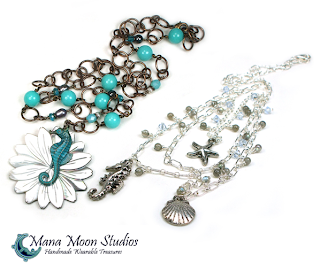 and the second comes from the ever lovely sharon of manamoon studios ... one of the most creative and talented jewelry artist (tho she doesn't admit it) whom i've had the honor of knowing. whose ceaseless energy and creativity inspire me to no end, whose kind encouraging words urge me to move ever forward and whose big heart reminds me each day that i myself should strive to be a better person. an artist, a crafter, a team mate, a confidant, a mentor and a friend ... that's who sharon is to me. just look at these two beautiful pieces of her work... leaves you drooling doesn't it ;)

and so what is the premio meme award? well... i'm suppose to say 7 things about myself. sometimes i think i talk too much about myself. i hope you are all not going to run away! here goes ...

1) i have never had a full time job in my life. the closest was after i graduated my dad asked me to go help him in his office. i worked my first day of a full time job ... leaving at 4pm and never returning! there goes the family business!

2) i'm actually embarassed to tell you this ... but i read accounting and finance at university. *hangs head down* ...

3) my part time jobs include being a dancer, a singer, a choreographer, a stage director, an actor and now a crafter and artist ... and oh yea... a business owner at etsy? but NEVER an accountant!

4) i sometimes envy the lives of my university colleagues (who read accounting with me) who are now CEOs, or high ranking people in the finance world (they are undoubtedly ALL richer than me :) ... but as soon as i visualize myself sitting at a desk with piles and piles of official papers in front of me ... the envy quickly dissipates and i'm quite happy with piles and piles of craft paper in front of me instead! *smug face*

5) i have an imaginery friend ... even now. his name ... blue monster. and when anything in my house goes wrong, i know it's him! his current project is making my kitchen tap leak for the second time ... *sigh* looks like i'll have to call the plumber in again ... on second thoughts, maybe the roto rooters would be a better choice ... :p

michele of michele lynch art blog - for her steampunkness and pretty faces
lulu of lulu kellog aka coastal sisters - for her caloriless cupcakes and hilarious tales
catherine of coral seas jewelry - for her sweet nature and yes! freckles rules!
angie of artangel - for all her art that i'm drooling over but can't afford to buy ... yet ;)
tammy of art and inspiration - for her sunny disposition and beautiful holiday images
lisanne of lisannerosalie - for her baby conures and her amazing garden and crafts
maire of maire dodd - for her insightful posts and ecclectic jewelry
merily of elbit blog - for just being an elf :)
i know there's 8 ... ahhh well :))