an ambigram of PEACE ...

since reading dan brown's angels & demons a couple of years ago... i've been intrigued by the idea of ambigrams! fascinating stuff ... ambigrams. wikipedia defines ambigram as "An ambigram, also sometimes known as an inversion, is a typographical design or artform that may be read as one or more words not only in its form as presented, but also from another viewpoint, direction or orientation"...

lately, well ... since angels & demons have been made into a movie, my fascination for ambigrams have returned :)) for those of you who have been following my blog you would remember that i once posted an ambigram of my daughter's name llara kaye (click on her name to go to that post). that was done like 3 years or so ago. and weirdly enough, i've never been able to design another since... one of those uncanny arty problems! but yesterday i was contemplating the idea of a PEACE ambigram ... it seemed easy enough, just 5 letters and i also wanted to add another design to my peace series. so i sat myself down and started working on a piece of graph paper. it's always easier to design symmetrical designs on a graph paper, so i know exactly the proportions of each letter. and this is what i came up with last night ... 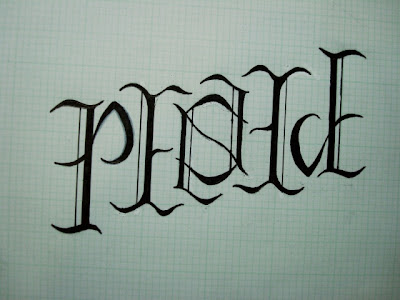 you can see that there are little corrections patches here and there (the miracle of correction pens!) :) anyway... i stopped here last night cos i didn't want to push it :)

but today i was quite determined to finish what i started, so i brought my base design out to starbucks and began working on the ambigram whilst sipping on my grande vanilla latte :) and i was really pleased with the end results :) 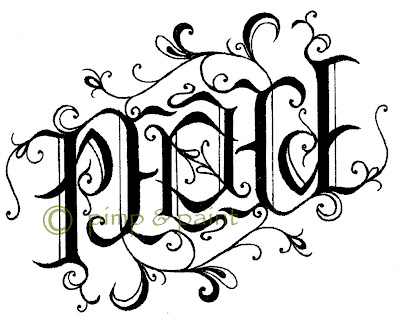 i may tweek it some more but it's more or less complete :) what do you think? i would love to hear from you :)